Before our CSG 10503 Full Depth Road Blocker left our factory to protect a UK Airport we had professionally filmed in a 4k format to showcase the quality manufacturing, fabrication and finishing we produce here on a daily basis.
This product is the only road blocker in the ‘world’ that has been attacked by a suicide bomber back in 2003 and it prevented the 4 ton detonation taking place at the intended target, thereby saving hundreds of lives.
This CSG 10503 product was installed at the British Consulate General in Istanbul Turkey in 1989 and since this time a wide range of differing HVM products have been brought to market.
The introduction of the suicide bomber – has undoubtedly ramped up the threat level for this type of terrorism. In the past, vehicles were very often parked in close proximity to the intended target and the bomb exploded remotely. Nowadays the typical terrorist is intent on breaching a perimeter – in effect driving at the intended target before initiating the explosion.
In November 2003 at the British Consulate General in Istanbul a terrorist bomber attacked the entrance gate at speed in a truck – breached the entrance gate and ran into the Cova Security Gates road blocker (sometimes referred to as road wedges or wedges) located just inside the entrance.
The road blocker arrested the vehicle and prevented further intrusion to the intended target – the Consulate building. The resulting explosion caused extensive damage to surrounding areas however, this incident proved conclusively that a well sited HVM product can and will protect the intended target – in this case the Consulate was left relatively unaffected protecting hundreds of people. 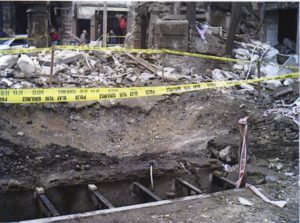 Cova Security Gates was the first company worldwide to have a HVM product tested in anger and this incident together with other terrorist events throughout the World at that time resulted in the UK setting up a separate Government body to tackle this form of terrorism. The CPNI – (Critical Protection of National Infrastructure) was thus created in 2007.
In the US independent crash testing (anti-ram) and verification of HVM product was started some years earlier with the US DOS scheme – such products as road barriers (road blockers) and rising bollards were tested using a 7.5 ton US truck at various speeds – the most common being 50mph.

Cova Full Depth Blocker positioned behind the gate that took the full impact of the bomb detonation.

Here you can see the left hand gate post prior to the attack, and on the right - the damage caused with the post still in tact.
Tagged as: Head Office News, Project References
Share this post: